While developing MogoTest, a service for detecting Web browser rendering issues, I found it necessary to be able to capture the contents of the entire browser canvas rather than just the current viewport. A full page screenshot lets the user see how their content looks from a holistic perspective. Unfortunately, capturing all of the content clipped by the scrollable viewport is not a very straightforward process.

One approach to grabbing the full canvas is to take a screenshot and then scroll the viewport to display all the previously hidden sections, stitching all of the images together to form one composite that represents the full canvas contents. While this generally works, it fails if there are any fixed position elements on the page or if there is ECMAScript in place to modify the DOM on scroll events because in both cases the very act of scrolling modifies the canvas’s contents. It would be better then to capture the entire canvas without scrolling.

The Problem with Making Windows Large Enough to Remove Scrollbars

If you have access to the source code of the application you’d like to capture the full canvas contents of, the solution is simple: just modify your message processing loop to handle WM_GETMINMAXINFO messages and modify the lParam as necessary. In the general case, however, you won’t be able to modify the binary so you’ll have to modify the executing process’s address space to inject your own message handler.

While the general concept is rather straightforward, the implementation is fairly convoluted. At the core of it, the complexity is caused by the WM_GETMINMAXINFO message being sent rather than retrieved by the window.

The Win32 API allows applications to monitor global event message traffic by setting up a hook procedure via the SetWindowsHookEx function. This is how utilities like Spy++ are able to tell what messages are being sent to a program. As of this writing, there are thirteen different types of hooks, each with its own context and execution point in the global chain.

If you’re like me, you’d probably try to register a WH_GETMESSAGE hook with GetMsgProc. On the outset it seems logical enough: intercept the WM_GETMINMAXINFO message before GetMessage or PeekMessage is called and modify accordingly. This will not work, however, and you will waste a lot of time trying to make it work. The nuance here is that WM_GETMINMAXINFO is sent to the window – the window does not poll for it – and as such a WH_GETMESSAGE hook will never see the message.

The next seemingly logical hook type to try is WH_CALLWNDPROC, which you register with the CallWndProc function. This type of hook will indeed intercept the WM_MINMAXINFO message before the window will, but unfortunately, the hook procedure cannot modify the message. This is by design and Windows will enforce it; trying to get a reference to the lParam to modify the value in memory will not work.

And so it goes with all the hook types. Many look like they’ll do what you need, but will fail in some way. It seems that modifying the WM_GETMINMAXINFO message from out of process is not possible. And largely that’s true. However, we can get creative by supplanting the process’s window procedure, which executes in process, by using SetWindowLongPtr from the WH_CALLWNDPROC hook. Example 1 shows what that interaction may look like.

SetWindowLongPtr is an amazing feature of Windows that lets you supply a new function pointer for a restricted set of functions in a Windows process. The new function can then call out to the original function through a handle to that function. One of the functions allowed to be replaced is the window procedure. By supplying our own we will be able to finally modify that WM_MINMAXINFO message. In Example 1 we showed how to call SetWindowLongPtr. Example 2 shows what the custom window procedure looks like:

Example 2: Modifying the WM_GETMINMAXINFO message with a custom window procedure.

Note that we only handle the WM_GETMINMAXINFO message and delegate all others to the original window procedure. Additionally, we uninstall the custom procedure as soon as we’ve accomplished what we need to.

We modify the ptMaxTrackSize component of the MINMAXINFO struct, which is itself a POINT struct, having an x and a y component. These should be set large enough to handle the full canvas plus the window chrome that surrounds the main client area. Once this is done, you should be able to size the window large enough to obviate the need for scrollbars.

Fig. 1 shows how this all ties together between a theoretical screenshot.exe process taking full canvas screenshots in Internet Explorer. 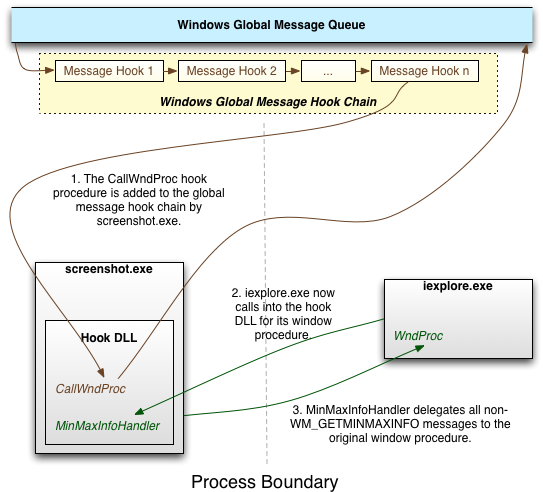 Now that your application can be sized large enough to capture the canvas contents, you must resize the window to that maximum size. This calculation is application dependent. For Internet Explorer much of the work is done with the IWebBrowser2 interface, for example.

One caveat is that if the window is already maximized, Windows will not send it a sizing message. My solution to this problem is to first check if the window is already maximized and if so note that fact, change the maximized state to restored, then resize the window to be large enough for the full canvas contents. Once done, I then re-maximize the window if it was previously maximized, effectively restoring the window to its original dimensions. It is a bit kludgy, but I haven’t been able to come up with a better solution. I suspect there is a way by intercepting a different window message, but I couldn’t figure out which one if it is in fact possible. This process can be seen in Example 3.

All that remains now is to capture the contents, unregister the WH_CALLWNDPROC hook, and resize the window to its original dimensions so the user doesn’t have to deal with a massive window. Example 3 pulls all this code together.

Taking full page or full canvas screenshots in Windows can be tricky, but the method discussed in this article should be widely applicable. In my particular case I was enhancing the SnapsIE utility. My SnapsIE fork illustrates how I use all of these techniques. Note that SnapsIE is written as an ActiveX control for Internet Explorer, so the code is likely more complex than is warranted in many cases.